The Difference Between AR & VR 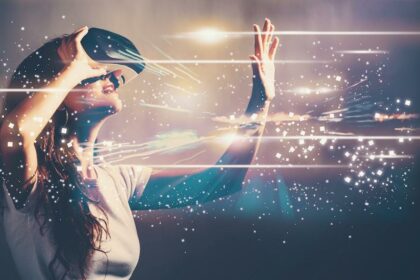 Technology shapes our world and the way we live our lives, connect with people, and run our businesses. Amazing technology can sometimes begin as a fad, but once in a while, that fad can evolve into how we eventually retrieve and absorb everyday information. That’s where Augmented Reality (AR) and Virtual Reality (VR) come into play.

Both AR & VR originally came to light in the form of entertainment, mainly in video game form or mobile phone-based face-altering technology. Brand new, consumer-focused technology usually begins in the entertainment industry, but after a while, people learn practical ways utilize these new tools in ways that can positively impact one’s quality of life.

For many non-tech savvy people, AR & VR (which both gained favorable attention within the last 5 years) carry enough similarities to easily confuse the uninitiated mind, especially since the word ‘reality’ rests at the end of both names.

So what is a great way to explain the difference between AR & VR to the lowest common denominator?

Let’s make it simple, shall we?

Picture VR as scuba diving in a wide ocean. If that’s the case, then AR would be best compared to visiting an aquarium.

Virtual reality, which requires the viewer to adorn a large headset, envelops a person in another world. You can turn and look anywhere and you will never lose the feeling that you’ve been placed somewhere else, in this case, the ocean.

Augmented reality however, takes our current reality and adds something to it. It does not move us elsewhere. It simply ​“augments” our current state of presence, often through the lens of a mobile phone or tablet camera instead of an aquarium’s massive glass dividers.

As they begin to slowly understand these key differences, we now see businesses and other entities (like the US military or the NFL) using VR & AR for practical purposes like internal training, education, or even assisting people in their everyday workflows. These examples of early adoption have forced numerous major players in the tech sector to predict that they see successful futures for both VR & AR.

By 2022, it is expected that over 80% of major companies will have used either AR or VR in their business. Whether it’s to help market products or to train new employees, right now, the possibilities seem endless for these two budding technologies that currently show no signs of slowing down.